There has never been a Pokémon like Eevee. There are plenty of Pokémons superior to one another, but Eevee is one of a kind. This little Pokémon can transform itself into seven different forms and seven different types. You can evolve your Eevee to Water, Electric Psychic, Dark, Fire, Grass, and Ice Pokémon type.

There are only seven Eevee evolutions so far now. Vaporeon, Jolteon, and Flareon from the first, Umbreon and Espeon from the second, and Leafeon and Glaceon from the third generation.

Eevee is an extremely rare Pokémon; however, it has a 100% catch rate. Eevee is flexible, and its mobility is next to extraordinary.

In Pokemon GO, trainers are unable to find Espeon in the wild, this is because of the main storyline of the anime. In the anime, we get to see that Eevee evolves to Espeon and the same principle is followed here in the game as well.

In Pokemon Go there are two ways of evolving your Eevee to Espeon. 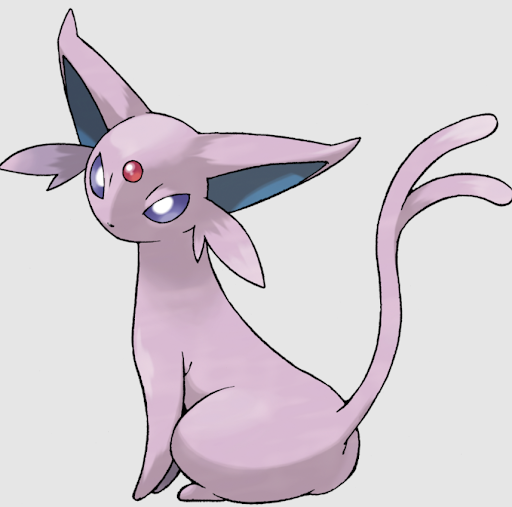 The Name trick and the Buddy trick. These two ways are very useful when you want to upgrade your Eevee to any of its particular forms. I suggest not to use candies, because using candies will result in random evolution and you may not get your desired pokemon.

The two procedures are clearly explained down below, make sure you read to know and understand how these tricks actually work.

Espeon is a pure psychic type of Pokémon known as the Sun Pokémon and owns the position at 184th in the Johto Pokedex. It uses the unique Synchronize ability, which Espeon passes to its status condition. It has mastery over its hidden power known as Magic Bounce which sends out all non-damaging ailments.

Espeon categorically falls under the field egg group, and it takes around 8,960 steps to hatch it.

Espeon is a four-legged mammalian creature in the world of Pokémon, features resembling a cat with a sleek and amethyst-colored furry coat. The Psychic Pokémon type showcases a red jewel on its forehead. Its face is exactly cat-like with a short and blunt muzzle and a tiny nose. Its ears are very similar to the ears of a fennec fox and have some two whisker-like tassels of fur just below its ears. Espeon’s eyes are deep purple and have nut-shaped white pupils. It has a tail with two ends.

Espeon uses its fine fur on its pelt and the red gem on its forehead to know the flow of air currents and can anticipate its opponent’s next move. It is also capable of predicting the weather.

Ways to Evolve Your Eevee to Espeon:

Espeon and Umbreon cannot be found in the wild; they are the evolved forms of Eevee. To get Espeon, you need to develop your Eevee by using any of the steps mentioned below. 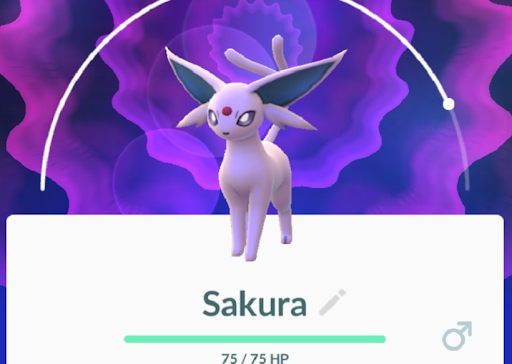 Two evolution methods can be constructive for you. The two methods give you specific evolutions. The first one is not much of a hassle, but the second one can be a good time killer.

First is the “Naming trick,” and second is the “Buddy trick.”

Now, what are these moves? Do not worry, and I got you covered.

The Naming trick is nothing complicated, and it is an easy cheat for evolving your Eevee to Espeon.

All you got to do is select your Eevee and rename your Eevee to Sakura. Now, if you are wondering why Sakura and not any other name, let me tell you that Sakura was the name of Espeon’s trainer, and it has been named after the trainer. Sakura appears in the 183rd episode of the original anime.

These are to be used only once. You have to rename your Eevee according to its form.

The seven Eevee evolution names are:

You have to be cautious while you are changing the name of your Pokémon, an extra space after the name can wreck the entire process of evolution, and you Eevee may not be able to evolve at all.

If we look at the original Pokémon games such as Pokémon Gold and Silver, there is a condition that you need to fulfill, i.e., the friendship with your buddy should reach a high level.

Also, the timing matters, like if you evolve your Eevee during the time of day, it will grow into Espeon. If you develop it during the night hours, your Eevee will transform itself into Umbreon.

However, in Pokémon Go, there is no such requirement of increasing the friendship level between you and your Pokémon but to have a walk with your buddy. You need to travel 10 kilometers with your buddy. And the rest remains the same, like Pokémon gold and silver. If you evolve your Eevee during the day, it will grow into Espeon, and if you develop it during the night, it will evolve into Umbreon.

Lure module becomes an excellent choice for many trainers to catch their desired Pokémon type.

There are three primary modules of lures: Magnetic, glacial, and mossy attractions.

The magnetic lure is an electric module that can attract any electric, steel, and rock type Pokémon for 30 minutes.

The glacial lure is a frosty lure that can attract water and ice-type Pokémon for 30 minutes.

Where to Get These Lures?

Typically, these lures appear in the shop, and you need to purchase these lures with 200 coins.

Also, there are often display as questline rewards from time to time. You better keep an eye on the quests.

Using one of these lures can serve you three benefits:

Like when in use, you can transform your Eevee to glaceon and Leafeon.

However, you can use the naming trick, but it is still essential for you to keep a note of it.

Summing up all the statements that have been said so far, it is clear that getting an Espeon is not much of a hassle. You can use the name trick or the buddy trick. I suggest using the name trick because the buddy trick will take a bit of time and 25 extra candies to evolve your Eevee to Espeon or Umbreon. However, you can use lures as well.

After using the name trick, the only drawback is that you will have to use the buddy trick to make other evolutions. You can use the name trick for the original Eevee evolution or Eeveelution like Jolteon, Vaporeon, and Flareon.

Do not use candies. Save them. Using candies to evolve the Eevee will get you a Pokémon at random. Because you want your Eevee to evolve into Espeon, use the naming trick.