The Pokémon GO is a popular game that features augmented reality—introduced in 2016 by Niantic in collaboration with The Pokémon GO and Nintendo.

In 2017, the Niantic Labs released the prime forms of Eevee, which are Vaporeon, Jolteon, Flareon.

These three original forms and Eevee in Pokémon GO have remained the most coveted Pokémon’s in the game.

Do not worry; we are here to help you evolve your Eevee to the form you desire.

Pokémon Go follows the mainstream of anime, which means you cannot find the original evolutions of Eevee in the woods. The only way to achieve the find the actual evolutions is to evolve them.

To evolve Eevee into Jolteon, you need to follow the Nickname trick, which asks you to change the name of your Eevee to “Sparky.” This is the best way to get your desired Pokémon.

And if you already used it, if you trade among your friends and get your hands on the Pokémon you want.

But remember to keep it a fair deal when trading. Both of these methods are discussed in detail in this article.

So, let’s get started with our Outriders guide:

How to Get Jolteon in Pokémon GO?

Before we jump off to our main topic, let have a quick overview of Eeveelutions. Eevee has seven evolutions and is the only Pokémon with that much potential.

Please do not go by its cute looks; it can go berserk when provoked. And it can be evolved into a psychic, fire, ice, water, electric, dark, and grass-type Pokémon. 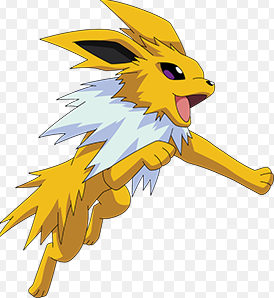 Jolteon is a decent electric type Pokémon among the seven Eevees evolution.

Jolteon is a Japanese name that means Thunder. Going after its meaning, Jolteon is an electric-type Pokémon. Jolteon evolves when Eevee is exposed to a Thunder Stone.

Jolteon is a four-legged mammal with a few traits of a dog.

Its body is layered with bright yellow fur. It has very long ears, which resembles a rabbit, with dark purple almond-designed eyes. Jolteon has a cat-like flat muzzle with a triangular nose.

Jolteon showcases its spiky mane encircling its neck. The legs and paws are slender, with three toes on each with no claws visible. It has spiny, fringy furs coverings its back and a short spiky tail.

Jolteon has mastered the ability to absorb. It can effortlessly absorb the attack of any electric type of Pokémon and heal itself.

Jolteon can easily absorb negative ions from the surrounding and convert them into its power, creating lightning bolts. The lightning bolts surged by Jolteon can exert strength of 10,000 volts. It can develop mere thunderstorms and lightning.

Solutions are compassionate and temperamental. It gets all charged up with a slight change in its mood. In other words, it can go from 0 to 100 in a fraction of a second.

When threatened or provoked, Jolteon’s furs transform into sharp bristles, and it will shoot these bristles towards his enemy. You can see tiny sparks while it exhales. This happens because of electricity.

Eevee needs to be evolved to achieve its forms.

There are many evolution methods to evolve your Eevee in the game. However, there is one sure-fire method among all the processes that can guarantee the evolution and is known as the Naming Trick.

So let us study in detail how it works:

The Nickname trick is all about assigning a nickname to your Eevee, which results in specific evolutions. All you got to do is to rename your Eevee with a particular nickname. Say you want to evolve your Eevee to Vaporeon, change the name to Rainer, and hit the evolve button.

Nevertheless, the prominent backdrop of this particular trick is that you can use it only once. Otherwise, you have to use 25 Eevee candy to evolve your Eevee, but it is entirely random.

To get the specific evolution forms, you need to use certain nicknames.

The nicknames of the original evolutions like Vaporeon, Jolteon, and Flareon are about the Eevee brothers in the anime.

How to Guarantee Eevee Evolutions Without the Name Trick?

The Pokémon company allows the name trick only once, but that does not mean that you cannot get your desired Pokémon.

Of course, there are more ways of doing it.

Getting the original forms of Eeveelutions like the Jolteon, Vaporeon, and Flareon is a random chance, though you can use the Eevee candies to try your luck. At the same time, the other forms have other evolution methods. 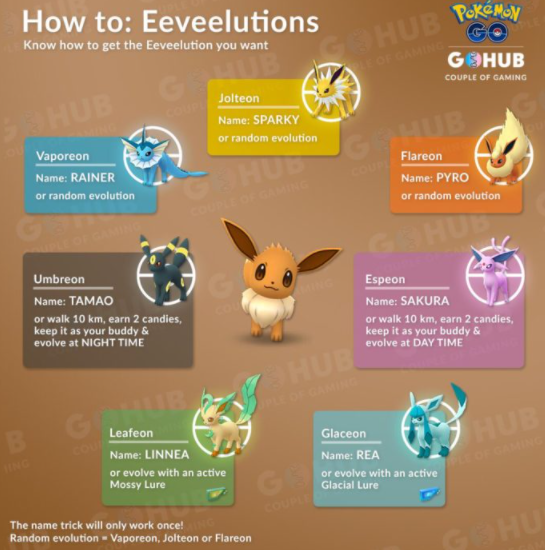 In the case of Espeon and Umbreon, you have to set them as your buddy and have a walk of 10 kilometers. Once you complete the task, your buddy evolved at the time-of-day results in developing into Espeon, and buddy evolving at the time of the night will yield Umbreon.

This trick works only when you have either of them as your buddy. This trick is called the Buddy Trick.

You need to evolve your Eevee to its following form while the lures are active. Do not forget to stay in the range.

How to Get More Jolteons in Pokémon GO?

Unfortunately, the original Eevee evolutions are always at random. Once you have used the naming trick, consider yourself stuck on the random generator.

Let me add some light to this, as it is a well-known fact that Eevee is ubiquitous, you expect it to pop in the driveway or parks, and Eevee is in the game since the game was launched. Hence, many trainers have teams of Flareon, Jolteon, and Vaporeon.

In case you have difficulties in finding one for you, you can always trade with other players.

In other words, if you have a friend in the game, you can ask them for their Jolteon, and if he or she agrees, you have to give your friend a suitable Pokémon to keep the deal fair.

This way is pretty famous among trainers in Pokémon GO.

In the game, Eevee has always remained the most coveted Pokémon as it has excellent potential. Not only that, you can upgrade it to every Pokémon type.

However, you cannot find Eeveelutions in the wild, and they can only be upgraded using Eevee candies and a few tricks.

The Nickname trick is one of the best sure-fire methods that can guarantee your Eevee’s evolution to that specific form. The naming trick asks you to rename your Eevee with its evolution names like (Sparky for Jolteon) and hit the evolve button. It was that easy.

Also, you have the buddy trick under your sleeve. Furthermore, to evolve Eevee to other forms, you like Glaceon and Leafeon, use the lure modules.

About the nickname trick, it only works once. After using you will not be able to use it anymore, but you can trade Pokémon’s with other players. And do keep the deal fair when trading.