Leafeon and Glaceon are the two latest Eevees Evolution forms that have been added to the game.

If you are wondering how to catch Leafeon and Glaceon in Pokemon GO, you will probably go the wrong way. The game follows the mainline structure of the anime, which means Leafeon and Glaceon cannot be found in the wild. The only way is to evolve Eevee into Leafeon.

After the update in 2017, the company added three original evolutionary forms to this game, and it was clear that every trainer would like to have a couple of Eevees with them at some point in time. 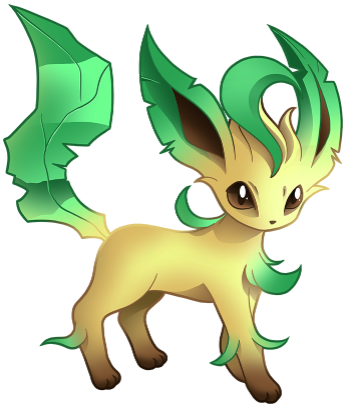 Following the mainstream of the anime, it is impossible to find any of the Eevee evolutions in the wild.

To get yourself a Flareon, you need to follow the Name trick in which you need to change Eevees name to Linnea and hit the evolve button.

As you can use the name trick only once, there is one more sure-fire way that guarantees the evolution, known as the lure module.

You have to spin a mossy lure module at your nearest pokestop. It attracts pokemons for 30 mins. And when it is activated, move to your inventory and look for Eevee; select Eevee. You will see a silhouette of Leafeon displayed on the evolve button; hit the evolve button to complete the procedure.

Both the procedures are explained in detail down below. Give it a read.

How to Get Leafeon in Pokemon GO?

Before we get started with our topic, it is essential to review Leafeon’s capabilities quickly. Leafeon evolves from Eevee when exposed to a Moss stone.

Eevee is one of the essential characters in Pokemon Go. It is the most common pokemon yet a coveted one.

Eevee is an adorable pokemon but can lose its mind and can demolish its opponent. As a result, you may not want to go by its looks and appearance.

It has many potentials and is the only pokemon in the series that does not have a distinct and defined evolutionary procedure. It can be evolved into the fire, ice, water, grass, dark, and psychic type pokemons.

Leafeon in Pokemon is a mammal with four legs. Leafeon’s features are its lithe body structure and make it look like vegetation protruding from its body. Its ears and its tail is styled in such a way that it resembles torn and tattered leaves.

Leafeon also showcases small leaves appearing from its body apart from its tail and ears. You can also see leaves growing out of its neck, legs, hind and back legs, chest, and forehead.

A more significant and curlier grows from the center of its forehead. Leafeons are of tan color with brown paws.

According to the Pokemon GO Pokedex, it states that Leafeons tend to be a pacifist and do not like to fight.

Leafeon spends a maximum of its time bathing and basking performing photosynthesis. Due to the process of photosynthesis, it does not feel hungry all the time.

It likes to live around the forests or in the woods as there is fresh air and grass-type pokemon.

The best ability that Leafeon showcases are photosynthesis.

Leafeon’s tail is sharp enough to slice off any large tree at once. It also produces a pleasant aroma, due to which it is trendy in the Galar region.

Leafeons have a statistic score of 525.

Now let us see how to get Leafeon in Pokemon GO:

The name trick is one of the sure-fire ways for guaranteed Eevees evolution. Using this trick is pretty simple and very easy. However, you can use it only once in the game.

The Eevee has been given some ‘Eevee Evolution names’ named after their trainers, also known as Eevee Brothers in the anime.

All you have to do is change the name of your Eevee and assign the names to evolve your Eevee, and hit the evolve button to a particular form.

Eevee has seven different forms, and there are seven particular Eevee evolution names for every form, which guarantees the evolution in Pokemon GO.

Eevee’s seven different forms are Vaporeon, Jolteon, Flareon, Umbreon, Espeon, Leafeon, and Glaceon. And to evolve it into a particular you need to nickname your Eevee to one of these mentioned below:

Jolteon – Nickname your Eevee to Sparky to make it evolve in Jolteon, an electric type pokemon.

Vaporeon – Change the name to Rainer to evolve your Eevee into Vaporeon, a water-type pokemon.

Flareon – Naming your Eevee to Pyro will evolve into Flareon, a fire-type pokemon.

Umbreon – To evolve your Eevee into Umbreon, you must change the name to Tamao, a psychic-type pokemon.

Espeon – Changing the name to Sakura will evolve your Eevee into an Espeon, a dark type of pokemon.

Glaceon – Change the name to Rea and evolve your Eevee to Glaceon, an ice-type pokemon.

Remember, you can use the name trick only once in the game. However, you don’t need to worry because you are not out of luck.

I look in the shop, and you will find four types of lures: Glacial Lure, Mossy Lure, Magnetic Lure, and Rainy Lure.

These are available in the shop for 200 coins each which you have to purchase.

Now, what do these lures do?

When activated near Pokestop, these lures begin to attract certain types of pokemons for about 30 minutes in a specific range. Sometimes, exotic pokemons appear, too, so keep an eye for them.

But, if the evolve button displays a question mark, do not go further and upgrade your Eevee because it may not evolve your Eevee to a form you desire.

To sum up, all the statements said so far; it is pretty clear that you cannot find any of the upgraded forms of Eevee like Flareon, Jolteon, Leafeon, or Glaceons in the wild.

There are two sure-fire methods to do this. one is the name trick, and the other method is to activate the lure module.

The name trick asks you to change the initial name of Eevee and set a nickname that guarantees the evolution of your Eevee to a specific forum.

And, the things you have to do with a mossy lure is you need to activate a mossy lure at your nearest pokestop. When it is activated, you need to check your inventory. The evolve button will display a silhouette of Leafeon, and it is an indication that the process is going in the right direction. To complete, you need 25 Eevee candies and click the evolve button. Please, keep a good stock of Eevee candies.