Eevee has always been the most desired Pokémon in the anime and the game as well.

Nevertheless, these original Eeveelutions cannot be found in the woods. Your Eevee can only be upgraded using Eevee candies and a few tricks. 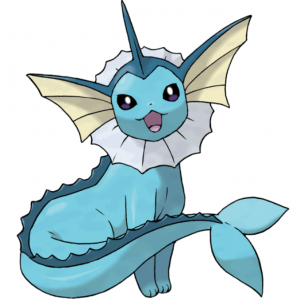 This article will walk you through the tips and tricks you need to know for evolving Eevee into Vaporeon.

Pokémon GO Eevee Evolution is one of the best things you can experience in the game. Glaceon, Umbreon, Espeon, Vaporeon, Jolteon, and Leafeon are the original forms of Eevees evolution. You cannot find them in the woods. So, how to get the evolved forms Eevee?

Like most other Eevee evolutions, you need to use the name trick or lure modules to get Vaporean.

To get the evolved forms of Eevee, you need to use the Name Trick. Using this trick can evolve Eevee to any of its original evolutionary forms. You have to change the initial name of Eevee with the evolution names and hit the evolve button. It is that easy.

However, there are other evolution methods for evolving Leafeon, Glaceon, Umbreon, and Espeon, like the Lure modules and buddy trick.

That’s about it, now let’s understand things in detail:

Vaporeon evolves from Eevee when the cute Eevee has exposed the water stone.

Vaporeon is water-type Pokémon that has physical traits of both ground and water Pokémon.

Let us understand the Physiology and abilities of Vaporeon in detail:

Vaporeon shares some traits from both ground and water creatures. The body of Vaporeon has a light-blue shade with a white ruff around its neck. It has creamy and yellowish ears, which appear to be finely made of webbing on the sides of its head and one at the top. 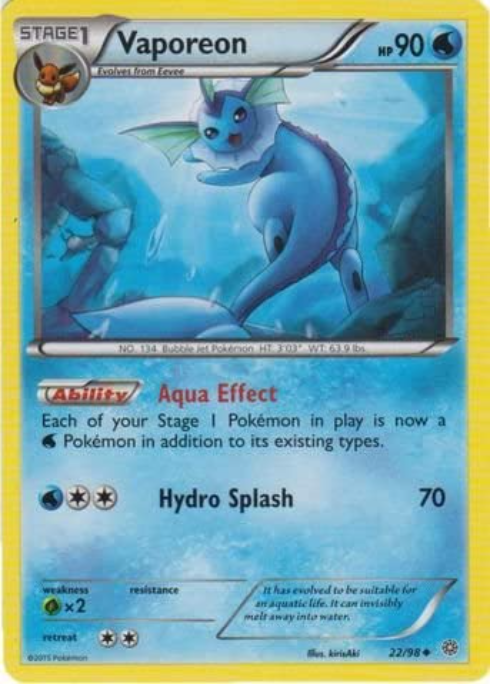 Vaporeon showcases blue ridges that run down to its spine’s length and goes on to its tail. Its tail looks pretty similar to the tail of a dolphin or a whale.

Vaporeon’s molecular structure is close to water, and when the sun’s rays fall on it at altered angles, its body glitters. Vaporous boasts about its slender and graceful body; moreover, it adapts to many aquatic regions to swim faster.

It has a feline-like feline structure, with a tiny muzzle and with a triangular nose.

Vaporeon uses a unique ability called Water Absorb. When a Vaporeon uses this ability, it can absorb almost any water type moves and heal itself. It is highly adapted to aquatic life, and it can even breathe underwater.

Vaporous can melt themselves into the water and can disappear within seconds. It has mastery over the water molecules.

It can detect water and moisture with the help of its fin, and when you see the fin jitter, it means it is going rain after some time.

It is fast and has a movement speed of 65.

In Pokémon GO, the nickname trick is the most trusted trick to evolve your Eevee.

The game strictly follows the mainstream of the anime, and hence Eevee can only evolve with the help of Eevee candy. Vaporeon, Jolteon, and Flareon are the three significant evolutionary forms of Eevee.

You can always use this name trick to evolve your Eevee to the specific form you want. However, you can use it only once.

How Does This Work?

This trick is all about assigning a specific name to your Eevee.

Let me break down the procedure into simple steps, which will guarantee your Eevee’s evolution.

Step 1: Go to your inventory or Pokedex and select Eevee.

Step 2: Change the name of Eevee to Rainer so that Eevee can evolve into Vaporeon.

Step 3: After changing the name, hit the evolve button to complete the process.

And that’s about it.

To get the specific evolution forms, you need to use certain nicknames.

The nicknames of the original evolutions like Glaceon, Umbreon, Espeon, Vaporeon, Jolteon, and Flareon are about the Eevee brothers.

This trick is one of the sure-fire ways to update Eevee to a form you want, and you can use this only once in the game.

After the massive update in May 2017, the Pokémon Company introduced a set of evolution items known as Lure Modules. These are to be activated at the pokestops. When activated, it remains active for 30 minutes.

There are three types of lure modules you will get to see in the game:

When you activate the mossy lure, it begins to attract all the grass-type Pokémon around.

When you activate the mossy lure, it begins to attract all the water and ice-type Pokémon.

The same goes with this one too, and the only difference is; when you activate the magnetic lure, it starts to attract all electric-type, rock-type, and Steel-type Pokémon.

These lure modules work efficiently, and if you are lucky enough, you may have an encounter with an Exotic Pokémon.

These lures come in handy evolving Eevee into Leafeon, Glaceon.

Once you activate the lure modules, do not leave the place. Stay in range. Then only you will be able to catch Pokémon.

The Name trick is among the best sure-fire methods that can guarantee your Eevee’s evolution to that particular form you want. The name trick asks you to rename your Eevee with its evolution names like (Rainer for Vaporeon) and hit the evolve button. It is that easy. Also, you have the buddy trick under your sleeve. Besides, to evolve Eevee to other forms, you like Glaceon and Leafeon and use the lure modules.

About the nickname trick, it is for one-time use. After using, you cannot use the same method again, but if you wish, you can always trade Pokémon with other players or your friends. And don’t forget to keep the deal fair and square when trading.